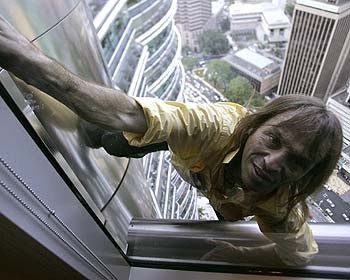 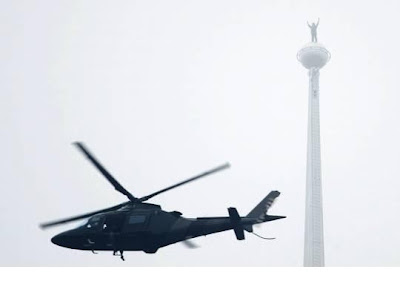 KUALA LUMPUR (Reuters Live!) – A French climber dubbed "Spiderman" for his ropeless ascents of some of the world's highest skyscrapers finally scaled on Monday a Malaysian tower he ...had tried to ascend twice before, and was then arrested.

Alain Robert, 47, used the cover of pre-dawn darkness to avoid detection from security guards at the 88-storey Petronas Twin Towers, and reached the top floor in around an hour and 45 minutes.

"I did try twice to climb, and climbing to the top is one of my dreams. It's a bit like a love story, not only about climbing the tallest building to make it official... but about completing something unfinished," Robert told Reuters ahead of the climb.

Robert reached the top of a spire at the peak of Tower 2 of the iconic twin buildings which houses state oil firm Petronas, then climbed down to an observation platform before being led inside by security personnel.

A police official told a Reuters photographer that Robert was later arrested and is being held at a police station. It is not known whether he will be charged for anything.

In 2004 he fended off stormy weather to climb the world's tallest building, Taipei 101, in Taiwan's capital.

"As a young boy I was afraid of heights and lacked self confidence," said Robert.
Posted by Mohamad at 1:30 PM
Email ThisBlogThis!Share to TwitterShare to FacebookShare to Pinterest