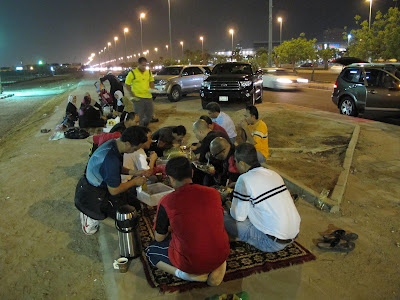 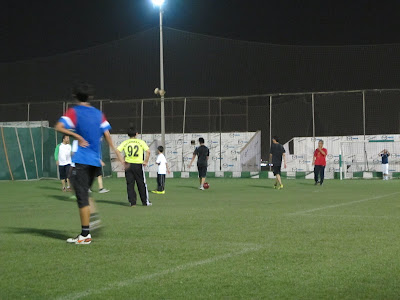 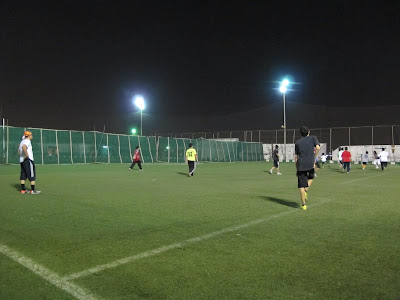 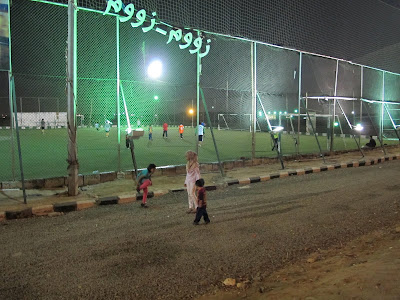 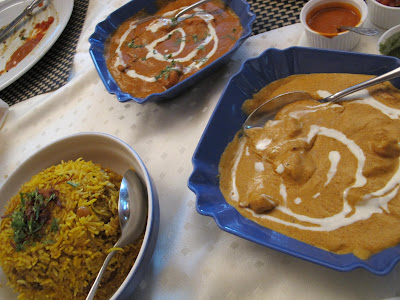 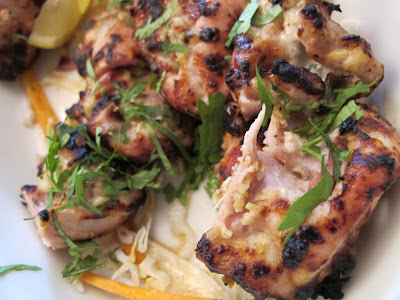 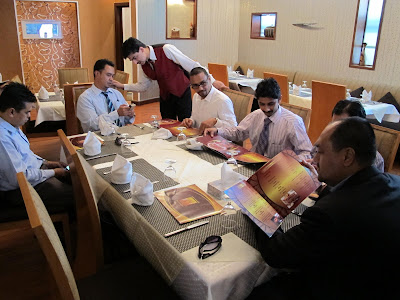 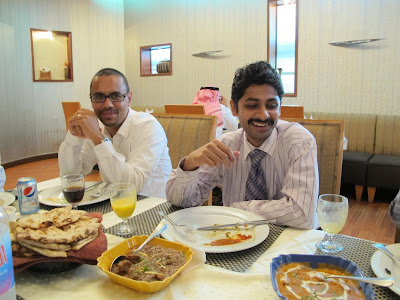 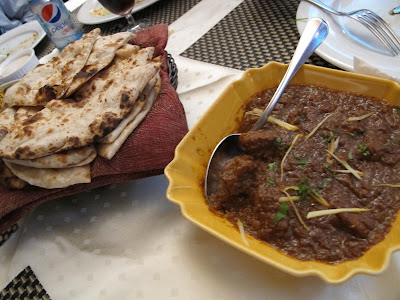 Had lunch with our office colleague who are celebrating Deepavali at Raj Restaurant in Tahlia Street, The food was good. Yummy Yummy..
Posted by Mohamad at 2:45 PM
1 comments
Email ThisBlogThis!Share to TwitterShare to FacebookShare to Pinterest 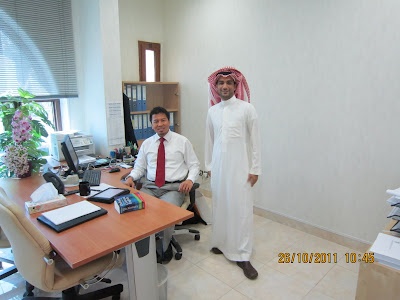 Me & Abdullah Al Maliki in the office
More than a year back when I received a call from Jeddah for a position of a Project Director, I was so excited. It was timely since my current project at that time was leading to a dead end. The Client has not been paying the contractor for more than 6 months despite the contractor kept moving at the slower speed. In my mind, it would be just a matter of time that the project will stop by itself for not having enough fund to proceed. My VP once said, when he assigned me to that project, if this project don't move.. you have to go.. he said jokingly. But with the trend I saw in the company, that was a hint from him. As long as there is a project that he can charge, he will keep me or else it is time to leave and they will give me one month's notice.

The position and offer in Jeddah was so promising... but I still have a choice at that time... When I asked about bonus, the interviewer said "normally it will be 10 months bonus for investment banking company". Wow that was awesome!. I never dream of having that. Although the offer is considered lower than what I get in Doha, the family package seemed to excite me apart from being close to Makkah which is always a bonus. Furthermore I have my ex colleague working in the same company. After much of investigation I accepted the offer to work in Jeddah and tendered my resignation. My HR also try to appeal if I would like to stay with the company for an assignment in Vietnam or Manila. But I sort of made up my mind wanting to bring my family along in Jeddah. I told my family even I would be getting less than what I earned in Doha, I hoped and expecting the year end bonus to cover the difference.

As I was packing up to move, I read the offer letter again and somehow I was mislead. The yearly bonus and family school has all been included in my salary and paid evenly throughout the year. Meaning, I was getting less than what I had before. But at that time it was too late.. I have cancelled my visa, shipped my things back home and it was just a matter of days that I will be moving. I accepted it as a fate and try to start a new better life with my family as status quo.

The day I arrived in Jeddah was the beginning of a lot of compromises, if before I was put in the hotel for a month till I settled down, now I was put into a serviced apartment for a week. The mobilization fee was hardly enough for me to settle down or even pay the rent. I had to get some advances from the company to pay for my yearly rental. The savings I had before, I had to use to furnish the new apartment right from scratch. Right from buying the ACs, furnitures and all the basic electrical goods. That was the start of a new beginning.

At work, it wasn't what I would have expected. The company is a newly established company which is still struggling in getting the registration and formulating it's policies. We are just a support department to the main core business and right from there I began to think of job security. In normal circumstances, our role supposed to be outsourced but it was the CEO's preference to have it in-house as there are limited reliable companies that could provide such services. Having known of the job instability, I decided to hold my plans to bring my family along as the mobilization and demobilization cost would be costly.

Being a new company, there are a lots of things which are not in place. The policies kept changing at their conveniences and one will have to swallow all the stringent requirement if one wants to stay longer. Staffs come in and go, either they were getting better offers or could not meet the company works expectations. As for me, I always ask myself till when they will keep me?

So, I was back to square one as I was in Doha... living alone. To make things worst, there are too much restrictions and constraints living here as compared to Doha but I managed it. It is always pleasing and blessing to be able to visit Masjidil Haram and to see Kaabah frequently after reaching the stage of depression with the surrounding environment. As if it relinquishes all the worry and misery that one had. Alhamdulillah it has been more than a year now and I survived!

To much things had happened within a year. The recent major event is the resignation of the CEO and the replacement. It was the previous CEO who was adamant to have a project management department and now that he is gone. My fate is uncertain. I once raise this question to my new CEO but from his response, I can sense that our presence may not be needed as he is focusing more into main core business. As we are currently having only one project to manage, the cash becomes very tight. It is just a matter of time this will come out and the management have to make an ultimatum.

As I am in the midst of arranging for my family Iqama for my family to be here during December for the first time eversince I am here. I had a bombshell yesterday. I have been told by the management, of considering to second me to the developer in order to cut cost. I was just speechless. All my hopes gone to vain....

I remembered a friend of mine asked me, "how long you want to stay oversea... come back .. there are a lots of opportunities for you here. Malaysia needs you and your expertise..." But then at the back of my mind, I still have my dues to pay and I was thinking as least if I settled my dues, have some savings and I could start some business then I would come back but not now...

But this is the facts of life one have to face whether we like it or not. To the uncertain future. We can only plan the best we could, constant prayer and hope thing will go as plan... I guess I have to update my CV and start fishing and don't know where I would landed on next as the journey still continues...

My prayers and hopes, I would get sometime better out of this in all aspects... As the Malay proverb says " Kita hanya merancang Allah yang menentukan..."

Posted by Mohamad at 9:28 AM
1 comments
Email ThisBlogThis!Share to TwitterShare to FacebookShare to Pinterest

Rating 7/10 & **** (4 bintang)
Posted by Mohamad at 8:49 PM
2 comments
Email ThisBlogThis!Share to TwitterShare to FacebookShare to Pinterest

Memang tugas ni amat mencabar. Segala masalah dalam pengurusan projek ada pada project ini. Daripada design, planning, construction you name it, it is all there. As a project person it is like my baby and I want to bring it to success.

At the same time saya mencuba untuk mendapat yang lebih baik dari segi kewangan. Ada sahabat saya berkata; after you complete the job, you will be marketable... but do I have to wait that long and by that time who want to hire me. Saya tiada pilihan lagi melainkan cari jalan keluar. Saya cuba apply di dalam dan luar negara.

Farewell to Azhar and Rosemadi 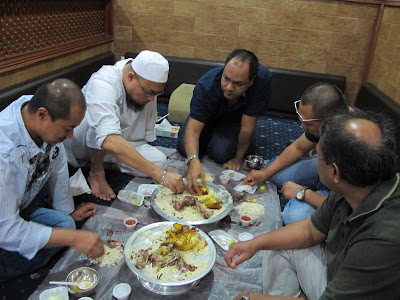 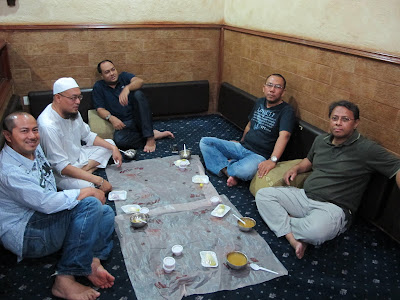 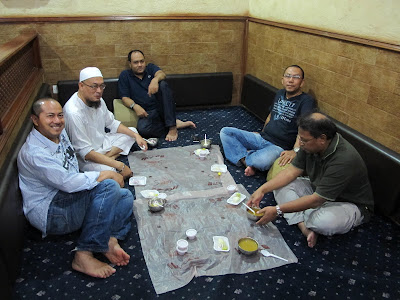 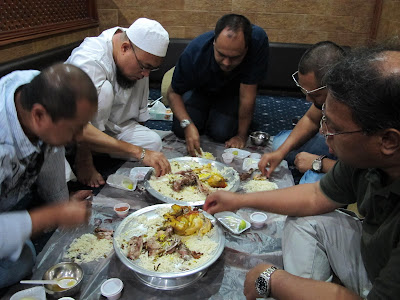 Bid Farewell to Azhar and Rosemadi ex colleague in KLCC both resigning from local Developer to a more greener pasture in Malaysia. Had makan2 .. mandi to be exact at As Sadr in Palestine Street, al Hamraa district. All the best to Azhar and Rosemadi. As for us perjuang masih belum selesai...